Who's A Good Dog? 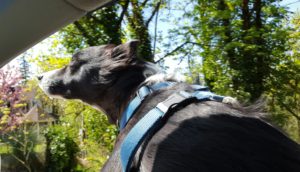 Breeze came from the Peterschmidt’s N. Albany home where Mike and Renee have been breeding Trail Blazer English Shepherds for several years.  Breeze was named by one of their son’s and it took.  She really does love to hang her head out of the car window and feel the wind on her face.

When we first brought Breeze home we stopped by a friend’s house, there in the same neighborhood.  Putting a bowl of water out for her revealed a hilarious episode of her digging to China in the bottom of the bowl.  That was the beginning of seeing her appreciation for water.

She has a propensity to enjoy all aspects of water, from the Pacific ocean to our 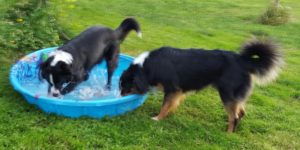 local river’s and streams, as well as her wading pool. This picture is of her and Rio, the sire of her August litter. Rio’s owners graciously provided a pool since she was so taken with their koi pond and riparian zone. 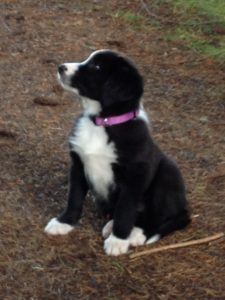 trated a spirit of adventure from the start.  We took her camping in the Oregon High Desert after only one day at the farm.  She continues to be a great camping dog and gets super excited to smell that sage and juniper again.

Breeze has been in most every marimba class offered since 20 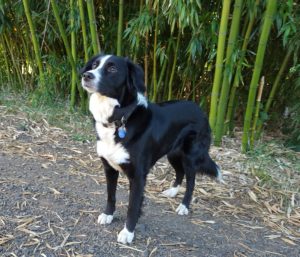 14, engaging the students as well as snoozing through the entire thing, which is not quiet.  In general, the breed can have an unusual tolerance for loud noises.  Thunder has never been a problem, nor fireworks.

Although she hasn’t been hunting, her lack of issue with sound would be a plus.  We think she must have hunting in her lineage because she will randomly take that traditional pointer pose as if she has found treasure in the bush. Since very young she also watches birds attentively, something like a hawk or vulture on high, seeing them far away.

Breeze is gradually learning what is expected around the farm.  She is not allowed in with the chickens but is close by the fence line, being required to hold position rather than run free during feeding time. 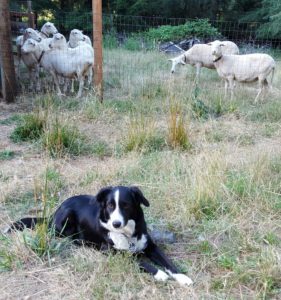 She also has grown up around the sheep although she is not yet in formally training. Recently the sheep were out and we needed to get them back in, calling on her to help, and to my amazement she did exactly what was needed.  She chased behind to push them through the door, and then chased no more.  She walked away very proud of herself.  So actually she is entering the training phase of sheep herding.  Anatolians have been know to be fierce protectors of their flock, so we were tentative to have a little dog like Breeze in there running after the sheep.  Our Anatolian is quite docile but still being conservative made the most sense, so this was her first real experience with the sheep.

Not enough can be said about her attributes as a companion and family dog.  She loves children and is always curious. 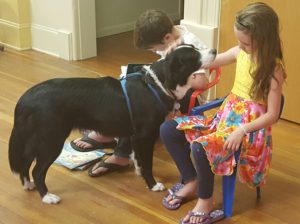 Not only does Breeze encourage you to be part of her world by reaching out with her paws to shake, or putting her head on your knee, she also is often found in any nearby area just watching what is going on, sometimes with one eye closed.

Breeze continues to mature and become a great all around farm dog.  We can always count on her to bark as someone drives up the lane, and settle quickly when acknowledged.  She is a guard for the property and that consistency is helpful.  She has also taken to guarding the place from stray cats.  When she was just young, a feral cat colony did some major damage to the chicken flock and so she learned early on to be watching.

She has excellent health.  People often remark about her coat being fantastic.  This 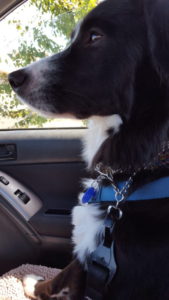 could be from getting a small portion of pure protein, meat or eggs, at suppertime, ever since she came home.  She has been tested and found MDR1 normal/normal, with Penn Hip results in the 90th percentile...this link is what is given on the English Shepherd website as part of her registration there.

Absolutely the best temperament, she attends most all well-being sessions with clients and although not a trained therapy dog, she demonstrates a natural aptitude for knowing exactly what is needed by all involved.  In a group she is extremely friendly and fond of people, and in pictures, she is often found smiling.